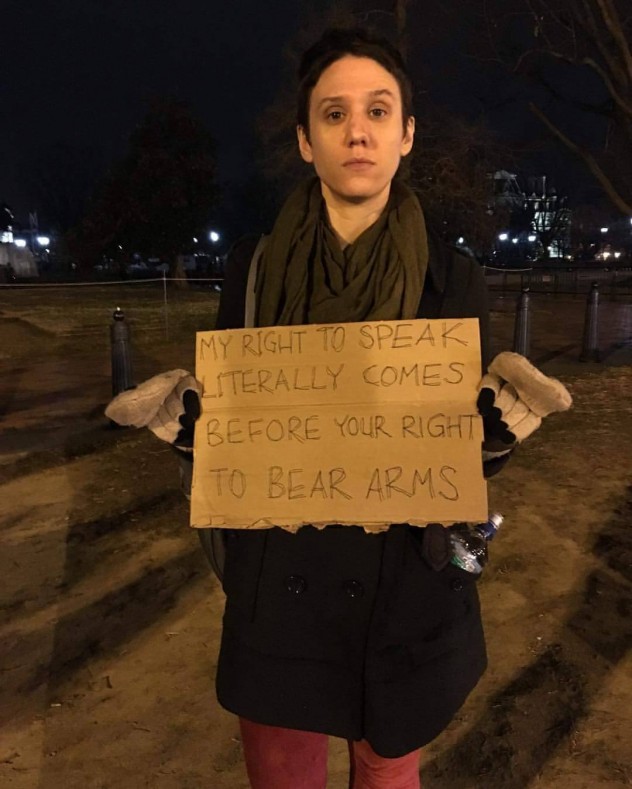 I’m not a member of Sioux Nation. My great-grandfather was half Muscogee. His mother and her parents are listed on the Dawes Rolls, the “Indian” registry last updated in 1905. Another term for members of Muscogee Nation is Creek. Most people know creek as another term for stream. I grew up in a small suburb in Pennsylvania, with easy access to creeks and clean water.

The Standing Rock Sioux Nation fought last year, and are still currently fighting, for their water. Fighting a company whose plans to run an oil pipeline over 1700 miles endangers the section of the Missouri River that they rely on for things so many of us take for granted: clean drinking/cooking water, bathing water, water to wash our dishes or hands or clothes.

But even before that recent spill, there were more insidious threats. Last November, less than a week before Thanksgiving, after using rubber bullets, attack dogs, and mace on demonstrators at Standing Rock, police officers doused them with water in temperatures as low as 23ºF. Nine degrees below freezing. The protestors were unarmed. They were accused by police of aggression. They were accused by police of starting fires. They started fires to get warm. They removed a road block so emergency vehicles could reach their site.

Whether you side with the demonstrators or the police, whether you allow your opinion to be swayed by those in authority who you can’t bring yourself to question, you have to admit: the police’s choice to blast the protestors with water was telling. They used the element the demonstrators were there to protect (and, in fact, the phrase the demonstrators prefer is “water protectors”). Authorities used water to threaten and injure those whose jobs it is to protect it.

The Obama administration worked to stop construction on the Dakota Access Pipeline. Drumpf reversed that effort via executive order.

The EO comes as no surprise, but it would be foolish to ignore the means. Consider the ways Drumpf and his cohort work to malign the media, with claims that facts are fiction, that real news is fake, that our free press and its journalists are enemies of the American people. Consider the ways Russia does the same. In response to accusations that he lies to the Russian people, and literally leads with false claims, Putin said, “Some people believe that whatever they say is the ultimate truth, and there’s no way that things can be any different. So when they get something in response, it causes a strong emotional reaction.”

Consider the ways “a strong emotional” reaction might work in the GOP’s favor. Drumpf’s unqualified cabinet’s use of “alternative facts” and his cries of “fake news” are just two parts of a well-stocked arsenal the GOP is employing, by way of their elected leader, to use language against us.

George Orwell’s name has been raised many times since the election, and not just because his masterpiece, 1984, is on the bestseller lists. The Ministry of Truth is the government agency that spins propaganda for Oceania in the novel. Propaganda as “truth.” Of course we’re going to talk about Orwell. But Orwell’s political writing didn’t start or stop with 1984. You only need read the first paragraph of his essay “Politics and the English Language” to see what I mean:

“Most people who bother with the matter at all would admit that the English language is in a bad way, but it is generally assumed that we cannot by conscious action do anything about it. Our civilization is decadent and our language—so the argument runs—must inevitably share in the general collapse. It follows that any struggle against the abuse of language is a sentimental archaism, like preferring candles to electric light or hansom cabs to aeroplanes. Underneath this lies the half-conscious belief that language is a natural growth and not an instrument which we shape for our own purposes.”

In re-reading that paragraph, I’m moved to ask: what happens when those in power have purposes counter to “our own”?

Just this week, NBC reporter Peter Alexander pushed for the facts when Drumpf lied (again) about the margin of his electoral college victory. Alexander asked “Why should Americans trust you?” and the questioning devolved into Drumpf asking, essentially, whether Alexander agreed that he had won the electoral college. Alexander provided only one fact: “You’re the president.”

In an astute article published yesterday, NPR correspondent Danielle Kurtzleben writes that the meaning of “fake news” is changing rapidly, and not only do we have claims of “fake news,” but there’s also “real fake news” and “fake fake news,” meaning the claim that a legitimate story is being branded as fake.

I do, however, believe that we refuse to talk or listen to each other. So often, we “agree to disagree,” which means we have no lines of reaching each other and no one’s voice is ever heard, all nuance is disregarded, and there’s no chance of finding common ground. It’s the fast track to the point where we try to drown each other out because we believe our problems are the hardest, the worst, the most important, the ones that need to be solved before anything else. It’s the verbal version of dousing our opponent with water when it’s 23ºF. We’re freezing them by shutting them out. We’re using language to sabotage communication.

So, here we are, communication cut off. Is there anything to be done, other than to “generally assume that we cannot by conscious action do anything about” the GOP’s current assault on language? Silencing Senator Elizabeth Warren, fabricating massacres that didn’t exist, pretending that real news is fake—what can we, especially my fellow writers who consider themselves the protectors of language, do?

But here are some suggestions. First, journalists, when covering Drumpf, refer to Orwell’s section on “OPERATORS OR VERBAL FALSE LIMBS.” Stop treating him like a celebrity. Stop pulling punches. If the GOP is trying to eliminate the EPA, and you think the bill won’t pass, don’t write “some of the agency’s defenders worry that it faces a far more stealthy threat of being hollowed out.” Don’t dress up your descriptions of horrible cabinet picks via distancing word order and diction. No one cares about your prose style right now. Tell us exactly who’s doing what, plainly and simply and quickly.

“The word Fascism has now no meaning except in so far as it signifies ‘something not desirable’. The words democracy, socialism, freedom, patriotic, realistic, justice have each of them several different meanings which cannot be reconciled with one another. In the case of a word like democracy, not only is there no agreed definition, but the attempt to make one is resisted from all sides. It is almost universally felt that when we call a country democratic we are praising it: consequently, the defenders of every kind of regime claim that it is a democracy, and fear that they might have to stop using that word if it were tied down to any one meaning. Words of this kind are often used in a consciously dishonest way. That is, the person who uses them has his own private definition, but allows his hearer to think he means something quite different. Statements like Marshal Petain was a true patriot, The Soviet press is the freest in the world, The Catholic Church is opposed to persecution, are almost always made with intent to deceive. Other words used in variable meanings, in most cases more or less dishonestly, are: class, totalitarian, science, progressive, reactionary, bourgeois, equality.”

You probably disagree with the idea that we shouldn’t use the terms fascism, democracy, progressive, science, and equality, especially when the situation calls for them. But when you’re using them, try to envision the ways they’ve been used when the situation hasn’t called for it. Try to remember the ways the GOP has slandered science because of climate change. Fascism certainly applies to Drumpf and his cabinet of anti-intelligence hate mongers, but you’re going to have to revert to, again, a plainer and simpler term. Also, much as it pains me to admit it, I’d sooner rely on simpler terms than expect that everyone knows all the history behind our nation’s relationship with fascism.

By the way, reverting to plainer language doesn’t mean dumbing everything down or leaving out details/doing away with nuanced meaning. It only means we need to start with simple terms in order to earn the trust of readers who will work to follow us when the terms get more complicated. But they’ll only do so if they trust us.

One more quote from Orwell’s essay, this one very short:

“The great enemy of clear language is insincerity.”

The issue with Drumpf’s and his cabinet’s frequent lying is that his supporters either know when he and his flying monkeys are lying, and his supporters just don’t care, or they believe every word from the new administration is true, just like they believed his campaign promises.

You can apply Orwell’s quote above solely to his supporters, or apply it to all the people—liberal and otherwise—who’ve said, “We should at least give him a chance,” though they haven’t said when that chance will be up, or what they plan to do when it is.

No matter whom you apply the quote to, here’s how to use it: for every time Drumpf claims that real news is fake, you can provide a lie he told on the campaign trail. He’s obsessed with reminding everyone that he won the election, so we can remind him—via Twitter, if you want, since it’s his favorite platform—how he lied in plain language at least 500 times during his campaign. That’s not an exaggerated figure, by the way. If you need a ready list of his lies, The Toronto Star‘s got you covered.

And if you’re looking for a way to use another kind of language—in the “money talks” sense—and you want to help the water protectors at Standing Rock, you can send them some funds directly. Or, in the longer term, you can also stop your money from funding the DAPL via investments from your bank. Nearly every corporate bank invested in DAPL, so check to see if yours is on there. And if it is, you can divest and move your money to a bank with sustainable goals through the Global Alliance for Banking on Values.

I’ve said it once, and with the way things are, I’m bound to repeat it again and again: the absolutely bare minimum we can do right now is to stay well informed. Every single day. Even on the weekends. Even on holidays. But if you’re up for doing more than that, and if you have this Monday off, consider going out and voicing dissent. (And although Boston’s not on that list, I promise you, we’re protesting this weekend. I’ll be in Copley Square on Sunday and the Common on Monday.) After all, it’s President’s Day, and it’s been nearly a month since we’ve had a president.

How to Use Language to Resist