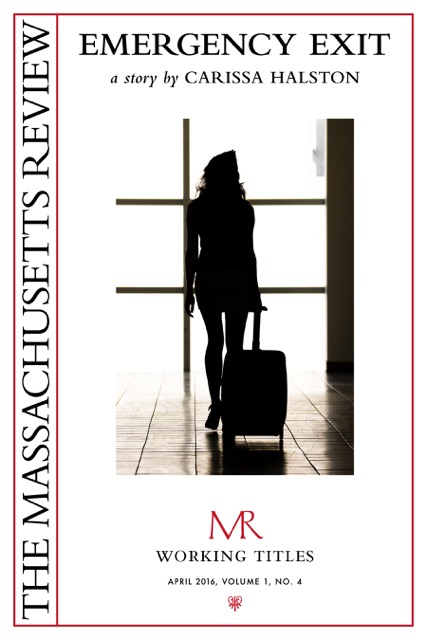 Published as an ebook through The Massachusetts Review

The Stewardess was out of control. She was told when to speak, what to say, what to wear, when to change it, how to stand, where to sit, and how to serve. But she decided who to service. And she decided how. Four passengers: two men, two women. Always in the lavs, always inflight, always all the way. And once they’d landed in postcoital waters, the Stewardess laid down the rules.

First, an agreement. The Stewardess would leave first. Second, the prevention of discovery. The Stewardess would hang an out of order sign on the door to the lav. Third, an understanding. No acknowledgment and no repeat performances. Fourth—and finally—a handshake. It was official. It was professional. It was the closest the Stewardess got to using her degree. Double major: communications and international business. International business, and yet there she was, stuck flying domestic.

And stuck with Cleo, the overbearing dynamo.

“The Captain gave the cue for final descent. Let’s get that last announcement on deck.” As if the last announcement could be split or even shared. “After that, we’ll do the seatbacks-and-tables song and dance.” The Stewardess’s song. Cleo’s dance. The Stewardess wanted to say no. She wanted to see Cleo fail without her. It seemed only fair since the only thing the Stewardess could do on her own was woo passengers away from their seats, while Cleo could manage the meal cart, dole out blankets, and defuse an inflight movie snafu all while looking like a statuette on the trophy for Stewardess of the Year.

Not that Cleo ever looked anything short of celestial, as she should have, what with her frequent sidestepping of the crashpads’ ten-minute bathroom rule, dashing to the airport two hours early to openly assemble herself in the ladies’. Standing at the sink farthest from the door, combing, yanking, twisting, clipping, gelling, and spraying, Cleo would violently toss her head back and forth to test for potential wind damage, leaving the sink so full of blond discards it looked like the vacant nest of a bachelor tarantula. Then it was on to the next sink to brush and floss, swish with Listerine, and gargle with water she drank directly from the tap. Having flecked the second mirror with mint and food, Cleo graduated to her third and final sink. There, she painted and plastered a face over her face. The Stewardess knew her strict routine. 1) Lay the foundation. 2) Line the eyes to look like unlit runways. 3) Gird the eyelashes to rival jet propellers. 4) Wield red lipstick like a senior signalman with illuminated marshaling wands. 5) Rouge or blot or shine as needed—but Cleo never needed. Finished with her regimen, Cleo left the ladies’, tugging her tidy Samsonite in tow, arriving at the gate with thirty minutes to spare, thirty clockable reasons the Stewardess abhorred and admired her.

(Buy the ebook at The Massachusetts Review)