Recipient of the Holmes Memorial Prize 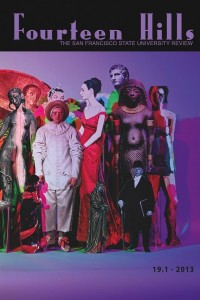 Leslie’s father had a five-foot circumference and liked to say his reputation preceded him. Fingers clasped over his ever-widening waistline, he often laughed, “This is My Reputation.”

Leslie had inherited her father’s size and she’d been called every name there was for it. Husky. Heavyset. Big-boned. Thick. A 3-for-1 deal in terms of scale. But since her weight had always hung between her shoulders and her knees, Leslie only ever thought of herself as round. And after three decades of being one shape, she assumed she’d be round forever. Round and regular. It was as simple as that. It was as simple (and as difficult) as that.

Then, at thirty-six, Leslie’s shape began to change.

“Dad.” She pulled her arm away. “Not to make light of something heavy, but—” She grabbed her sides in two bulbous fistfuls, ample weight an ex had once called her armrests, a term she hated only a little less than the sticky-sweet southernmost love handles. “—all I’m gonna say is: Fat chance.”

A forked vein split her father’s forehead. He laughed that hard. Leslie rubbed his shoulder to calm him down. He mopped his hairline with his sleeve. “You’re a riot, girlie. Don’t you ever change.”

Leslie knew he didn’t mean that—he’d always said she had room to grow. At seventeen, she’d worn a size nine shoe, but he’d insisted she get a ten. “You’ll grow into it,” he said. She’d worn tens ever since. Nineteen years on unsure footing. And when her father asked about her crooked walk, she blamed her limp on her job. Leslie spent entire days on her feet, assembly line work at a meat packing plant that she called, with all due affection, The Chop Shop. Whenever anyone asked what she did, Leslie said, “I make prepackaged food.”

On the day her father lost his first toe, Leslie was there when he came out of surgery. Card in hard, she sat by his bedside, waiting for him to wake up. The card’s cartoon bear encouraged him to “grin and…endure.”

Closing the card, her father said, “Never quite what I expect.”

Leslie gave him a pat smile and reached for the edge of his hand. Her fingers smelled of chemically treated gloves. The odor of the plant always followed her.

“Pigs and calves this morning. Lambs in the afternoon.” She remembered how adamantly dead their bodies looked, how gray and eventually bloodless. She made a loose fist. “Sometimes—I think they know.”

Her father shrugged. “They might. But they taste better than we do, so.”

“You speaking from experience?”

“Well, they say they’re giving me meat in here, but it smells like some of the older patients.” He lifted his arm to his mouth and mimed biting it. “In here, they call us beef.”

Leslie stirred in her seat. Lately, the idea of eating beef sent wild knots spinning through her stomach. Cow tasted like oversalted cornmeal. Veal looked like deflated infant lungs. She knew she was done with it. Giving it up would be easy. As easy as lopping off a toe.

(Read the rest at Fourteen Hills.)